Pooling our energies and concentrations on what’s ahead in 2020 and beyond, gender is definitely a big issue for HORIZONT3000. That’s the reason why we would like to take the opportunity and look back at the DKA and HORIZONT3000 Partner Meeting that took place in November 2019 in Arbaminch, Ethiopia, where gender issues constituted a main topic on the agenda.

(The meeting got featured on the HORIZONT3000 Blog as well (in German). Visit it here.)

The meeting counted with 29 attendees from 12 different Partner Organisations. Among the participants were Diocesan Directors and Social and Development Coordinators from church partners as well. Our dear colleague Friedbert Ottacher facilitated the meeting together with representatives from the DKA and Martha Nemera, a renowned gender expert, who held the one and a half days gender workshop. Stefan Hlavac, Head of Development Cooperation Office Ethiopia from the Austrian Development Agency, attended the meeting as well.

Just before we all headed off to our Seasonal Holidays in December, I had a nice chat with Friedbert about his perception of the meeting. He claimed that most of the participants were male, due to still very strict hierarchies and role distributions and the fact that a lot of them were priests and executive personnel. He recalled, however, that Martha Nemera’s presence, the gender consultant, “made the corresponding anti-statement”. The content and activitites she passed on were taken in very receptively. Friedbert believed that this was above all “thanks to Martha, who brought the sessions across in a very easy-going and engaging way.”

Whereas the regular objective of the meeting was to get familiar with the new DKA country strategy, gender mainstreaming played an equally important role. The goal was to raise awareness among Partners of gender mainstreaming not only throughout their programmes, but also within their institutions.

This is how they described the specific objectives of the meeting:

If you are interested in the full report of the meeting (Action Points included), please download it here:

In order to achieve these goals the workshop’s contents were designed accordingly, which resulted in the following main topics: 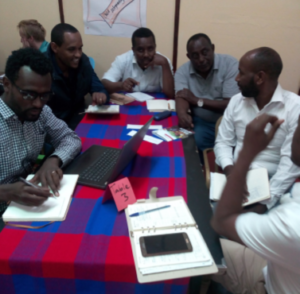 “The overall focus was to raise awareness for gender issues in order to change structures and dynamics for the better above all within the organisations and institutions, which poses an even greater challenge than making a difference in terms of gender throughout the projects”, explained Friedbert. “As of today, we still have to develop knowledge around gender and equality. Martha presented the Gender Analysis that she had conducted and its key findings. First and foremost, we have to address the lack of Gender Policies.”
He further reported “a highlight of the workshop was the field visit, where participants were divided in two groups and given the task to assess the effect of stereotypes. In order to do that they discussed and worked out a Gender Responsive Checklist as a monitoring tool.”

The workshop’s discussions and reflections contributed to providing the participants with the tools they need to develop and implement their own gender action plan for institutional and community transformation. All partners involved agreed on creating and implementing an action plan for their organisation. Friedbert seemed quite pleased with the outlook on achieving this: “For the first time, we are able to make a special offer to our partners: an oriented coaching with Martha Nemera, who will train and accompany executive personell in gender related issues included in the action plan over the period of three years. This does not only apply for ADA but also for DKA partners.”

Considering Friedbert’s valuation, the participant’s feedback and Martha Nemeras expertise, the conditions favour the undertaking of a gender analysis as well as the effective development and implementation of a gender action plan across programme and organisational level. As gender plays an ever more important role in all of our partner regions, we will stay tuned to the topic and keep informing our community.

As always, we are very interested in getting to know your take on the issue. Please leave us a comment below and let us know what you think about it, how you and your organisation are dealing with gender or how you would like it to be dealt with. If you have any recommendations, please feel free to share them here so that others can benefit from them as well.

Sarah is part of the Knowledge Management Team in Vienna and in charge of the KNOW-HOW3000 platform. She is eager to provide all the tools the KNOW-HOW3000 community hopes to find on the internet platform. So if you have any requests, questions, recommendations or comments regarding the platform, please get in touch with her. She is always happy to hear from you.