As Flying TAs, Agnes and I arrived in Uganda in mid-August curious to meet our new colleagues at the Regional Office East Africa (ROEA) and the various Partner Organisations we will work with. Our first days were organised smoothly: we were introduced to the city of Kampala by ROEA drivers, went apartment hunting and got acquainted with ROEA staff and our work tasks. The second week was dedicated to the in-country training about which we had not heard so much in the preparation course. Thus we were eager to see what it entails. 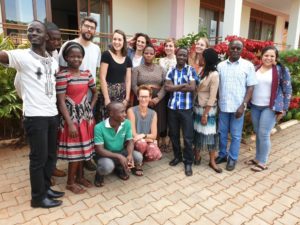 In the beginning of the training, we got a thorough introduction to the regional office with presentations from all departments. Our colleagues took it on themselves to present not only their work area but also answered all our questions about how the ROEA operates. The week continued with a two day intercultural communication training facilitated by Dr. Bisaasso. Compared to the one in Vienna, this training was special because we were a mixed group of Europeans, Ugandans and Tanzanians. National ROEA staff as well as the counterparts of some TAs participated in it allowing for interesting discussions to arise. While Dr. Bisaasso included some theory on culture shock and communication, overall the training remained practical in nature. Finally, on the last day the Regional Director, Sabine Mantsch, held a training session on organisational development. The session was very interactive and gave the participants an idea of the challenges that apply to the work of a TA and to organisational development in general as well as in an intercultural context.

All in all, the week was a good opportunity to interact with staff members at the ROEA and to meet other TAs and their counterparts of the Partner Organisations. It helped us to better understand how the ROEA operates and how we can integrate the values and principles of development cooperation in our daily work.

Annika Witte works as a Flying TA in Knowledge Management in Uganda. Annika is contributing to the KNOW-HOW3000 programme, working together on a needs basis with the ROEA and different Partner Organisations from the HORIZONT3000 East Africa TA and finance programmes, with a focus on Uganda.